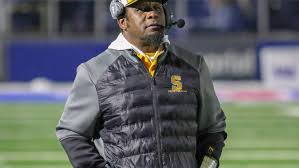 This interview took place after school in the weight room at Springfield High School. Players were coming in and out to complete their workouts. Some players even had to catch the city bus to get there to do their workout. They were late but finished it. Kids were knocking on the window just to get Coach Douglass’ attention to wave at him. It was obvious, that players had bought into his program, and Springfield High School students loved him.  Coach Douglass has not retired from coaching yet, but you can clearly see why this future OHSAA coaching hall of famer is a G.O.A.T and a legend.

Looking back, I had the pleasure of meeting Coach Maurice Douglass while I was serving as a military recruiter in the mid to late 2000’s.  He was the head football coach at Trotwood Madison High School. I had the opportunity to work with him on a couple of football camps. During that time, I could tell that his players and the other people around him had a lot of respect for him. I don’t think it was because of who he was, but of how he treated them.

Maurice Douglass was born in Muncie, Indiana where he resided until the age of 7. Him and his family then moved to the Dayton area, and he grew up there attending elementary, middle school, and high school in the Trotwood Madison school district. In high school, he played running back and defensive back for the Rams. The Rams were coached by John Butler at the time. And in 1981, Trotwood Madison made it to the state championship game losing 28-7 to Cleveland Benedictine.

A year later, Maurice graduated from Trotwood Madison. He attended Coffeyville Community College in Coffeyville, Kansas to play football. Douglass credits his high school football coach John Butler with getting him the opportunity to play college football at Coffeyville. It started off rough for him.  In the summer just before arriving on campus, he said that the Coffeyville head football coach “…called me just about every other day and told me, you don’t need to come here, you’re not going to make it here. I went out there, the first day in the weight room and I benched 330 as a freshman. I was the strongest DB and end up being the only DB that they kept from out of state, out of 9 dudes.” In the first game of the season, the starting cornerback twisted his ankle on a kickoff. Douglass entered the game to play and had 9 tackles, an interception, a forced fumble, and a fumble recovery. Needless to say, the starting cornerback never saw the field again. Maurice made first-team All-American his sophomore year and had the opportunity to attend multiple schools after his time at Coffeyville.  He ended up choosing to attend the University of Kentucky since it was the closest to his mother.

At the University of Kentucky, Douglass started after the second game of the season and never looked back. He ended up with 3 interceptions during his 2 seasons at UK. After spending 2 years playing with the Wildcats, in 1986, Douglass was selected as the 221st pick in the 8th round of the NFL Draft by the Chicago Bears. The Chicago Bears were coming off winning the 1985 Superbowl and the team was full of stars notably, Walter Payton, Richard Dent, William Perry, Mike Singletary and coached by legendary Head Coach Mike Ditka. Douglass was excited for the opportunity to play with his idol Walter Payton. He recalls the first time he went head-to-head with the Hall of Fame running back, “I’m working with the 1’s and Walter comes out of the backfield and it’s me and him in open field. The only thing on my mind was I remember the stiff arms. So, I shoot for his thighs, hit him, and brought him down.” Douglass played in the NFL from 1986-1996 with the Chicago Bears and the New York Giants. He played in 139 games with, 6 interceptions, 2.5 quarterback sacks and 1 touchdown. Douglass credits Detroit Lions great and NFL Hall of Famer Barry Sanders as the hardest person for him to tackle so he really didn’t want to see coming out of the backfield. Douglass on Barry Sanders, “I didn’t want to be on that highlight reel. Barry Sanders made me have a lot of rough nights. That week of practice you weren’t sleeping.”

After his professional playing career was finished Douglass returned to Ohio to settle down. He began his high school coaching career at Springfield South where he was the defensive back coach. After a year of coaching defensive backs at Springfield South, Maurice was hired as the head football coach at his alma mater, Trotwood Madison High School. Coach Douglass’s first year at Trotwood was a rough one. The Rams finished with a 2-8 record for the season, but he did not let that deter him nor his team. The following year, Trotwood had a record of 8-2 and made the playoffs for the 2nd time in school history, “it was on and up from there,” he said. From 2010 to 2013, Coach Douglass led the Rams to four (4) straight OSHAA Football state championship games. The year 2010 was the Rams first OHSAA State finals appearance since 1981, which was Douglass’ senior year at Trotwood. However, that year the Rams came up short losing to Maple Heights High School (Cleveland, Ohio), 45-33. In 2011, the Rams went 15-0 and won the 1st ever OHSAA State Championship game in the school’s history defeating Avon High School (Cleveland, Ohio) 42-28. Douglass and the Rams went 1-3 in the 4 straight state finals appearances. Most high school football coaches never even get the chance to play in a state championship game and Coach Douglass was able to play in 4 which he describes as “…a joyful experience.”

The year 2013 was Coach Douglass’ last year coaching the Rams. He left the powerhouse that he built to become the head football coach at Springfield High School.  Coach Douglass saw an opportunity to build a great organization at Springfield High School. The school had tremendous talent with some of the kids having not played football since 5th or 6th grade. Went 2-8 for the season in his first year with the Wildcats.  He recalls, “So that first year was just trying to get those guys to believe in me and know that I would have their back.”  Douglass has had a huge amount of success coaching the Wildcats. Most notably, in 2021, leading them to the Division 1 State Championship losing to ST Edward High School (Lakewood) 23-13.

Another unforgettable opportunity was coaching his son Moses Douglass at Springfield. In Douglass’ words “It was a fun time and a challenging time for him.” Douglass remembers a time during Moses’ freshmen year during practice where he didn’t make a play. Douglass shared that he gave his son an earful on the way home about it. Then he said “The lord beat me up and I went to him (Moses) and I apologized and was sorry. Once practice was over, football was over, I’m Dad. That took our relationship on the aspect of football to another level. Once football was over, it was just dad and son.”  Moses graduated from Springfield and attended Maurice’s alma mater, The University of Kentucky on a football scholarship. He just recently transferred to Alabama A&M University to finish out his collegiate football career.

Throughout his 22 years of coaching, Maurice has coached an abundance of talented players. Most notably, Roy Roundtree, Mike McCray II, Bam Bradley, and Danny Davis. When asked who was the best player that he’s ever coached he said, “Too many to name. It’s too many guys that are special.” However, Coach Douglass did go on to say that “Danny Davis would probably go down as one of the best overall athletes that I had the ability to coach.” Coach Douglas spoke proudly about all the kids he’s been able to coach during his time at Trotwood and currently at Springfield. You can tell that he really enjoys watching these kids grow throughout their time in his program. He mentioned that the best thing about coaching is signing day. “The greatest day for me of the year is signing day. On signing day, you get to see generational curses broken.”  He went on to say “if I can get 12-15 kids to sign to go to school every year, I’ll take that over a state championship every year. I know I have done something in my community that’s going to make a difference.” If you can play football, Coach Douglass can find you a home. Every year, his program consistently has one of the largest number of football players signing National Letters of Intent.

Between Trotwood Madison and Springfield, Coach Douglass has also had the opportunity to coach a lot of great football teams. When asked, who was the best team you ever coached?  He replied “That’s 2011, we went 15-0, we won the state championship. We brought the first one to the “wood”. So that’s a no-brainer.” Douglass credits the 2021 state runner-up team as the best team he has coached during his tenure at Springfield. That team was led by Mr. Football Runner up and Jacksonville State University commit, Te’Sean Smoot.

“Coach Mo Doug” as many call him, has made a tremendous impact on the game of football. Many of the younger coaches in the area that I have spoken to all look up to him. He loves his players, and loves being a football coach so he can help change lives. “I am a man of the boys. I looked after my kids (his players) and at the end of the day hopefully, they become better fathers. That they will do the same thing. Love the unlovable and reach out a hand to that kid that is struggling at home,” says Douglass. He isn’t only teaching the game of football; he is also teaching his players how to be a man and about the game of life.

WHERE ARE THEY NOW? VOL 1 Roy Roundtree We are doing a series of interviews on former players from the 937 area on what they are currently doing now. These

The Trotwood Madison Rams have a long history of producing outstanding talent. Timothy Carpenter is no exception and one of the next one’s coming down the pipeline. The 6’4 200

WHERE ARE THEY NOW? VOL 3 Keith Byars We are doing a series of interviews on former players from the 937 area on what they are doing now. These former