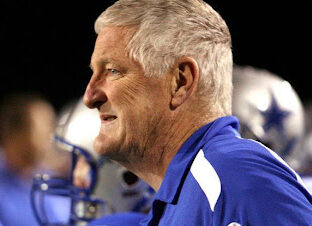 We are doing a series of interviews on coaches in the 937 area who many consider to be a GOAT (Greatest of All Time) or a Legend. These coaches have made a tremendous impact on the community and the game of football. Their imprint on the game will be seen for years to come.

I have never officially met Jim Place in person. We’ve only briefly greeted each other in passing. And I never had a conversation with him until this interview. Now that I have done this interview, I can certainly see why Coach Place is well loved and revered by many.  All throughout the interview Coach Place had me fired up and ready to suit up to play the game again. You could just hear the passion in his voice for the game. I asked coaches and former high school players in the area what coaches they considered to be a GOAT or a Legend, and his name consistently came up.

Jim Place grew up in Massillon Ohio, the mecca of Ohio Football. He attended Canton Central Catholic High School where he played football alongside of NFL Hall of Famer Allan Page who also served as the first African American Associate Justice of the Minnesota Supreme Court.

In high school, Place played offensive tackle because he was tall and then went on to play Linebacker at the University of Dayton under Head Coach John McVay. He started for 3 years and was elected team captain.  During his time at the University of Dayton, he obtained his bachelor’s and master’s degrees. Then went on to teach and coach the game of football for almost 50 years.

Coach Place knew from an early age that he wanted to get into coaching. He said, “yeah I knew from the time I was about in the 8th grade I wanted to be a coach. It was a combination of everything I loved. I love working with young people and I love football. When you combine the two, it was pretty obvious to me that when I was done playing that’s what I wanted to do.” Over the 48 years of coaching, teaching and mentoring kids, Place has coached at nine different schools between Dayton and Cincinnati. He’s held 7 head coaching jobs, won a state championship in 2002 and was inducted into the OHSAA Coaches Hall of Fame in 2012.

Coach Place’s coaching philosophy is to play physical football. “We’re going to be emotional. We’re going to play physical football. We never wanted to injure the opponents, but we wanted to inflict pain on their bodies for four quarters.” Place also spoke about his philosophies off the field. He stated, “I want to try to help young men become more successful, more happy people in their lives.” In the past 25 years, Coach Place collected a list of everything that he believes in. A list of things that he believes in as a man, father and as a spouse. He shared this list with me, and I will continue to add to it.

Indeed, Place has had a long coaching career, and during this time the opportunity to coach some very talented players in the Dayton area such as Brandon McKinney, Javon Ringer, Carlos Brooks, Angelo Chattams and Brandon Harrison. He also coached 14 players that went on to play in the NFL. When asked who the best player was, he ever coached, he responded, “that’s a tough question and obviously I can’t answer it.”  But said that, “I can list 10 guys that never played another down after high school, and they were just as good.” He was excited talking about all his players, the stars, and the underdogs. No matter the player, in Brandon McKinney’s words, “Jim Place was the type of coach that could get everything out of you, and you wouldn’t even realize it.”

Coach Place explained how the year prior to winning the state championship, the team came up short and lost in the final four. The juniors approached him and told him that they were going to win the state championship the next year. Coach Place told them to “prove it.” From the time workouts started until August 1st not one senior missed a workout. “No vacation, no doctors’ appointments, 24 seniors and we had perfect attendance at weights,” he said. There was no doubt that the 1994 team was dear to him, but the 2002 state championship team was special to him as well.

Coach Place has 12 former players and assistant coaches that are head coaches today. Former Chaminade Julienne and new Beavercreek Head Coach Marcus Colvin, Washington Massillon Head Coach Nate Moore, and Coldwater Head Coach Chip Otten to name a few. He has left a long-lasting legacy on the game of football. One thing to be said about Coach Jim Place, is that he really cared about his players, and they really cared about him. “I hope that I built a bond with my players. I hope that every player that I see, if I bump into him somewhere around town, he goes that was my coach,” says Jim Place.

If you have never heard of the name Bryce Schondelmyer you may soon will. The 6’2 195lbs c/o 2023 quarterback from Arcanum High School was named the Ohio Prep Sports

The Stourm Is Coming David H. Ponitz CTC is the home of one of the top football players in the Dayton Public School system. Stourm White is what I would

The Trotwood Madison Rams have a long history of producing outstanding talent. Timothy Carpenter is no exception and one of the next one’s coming down the pipeline. The 6’4 200

Springfield Shawnee is the home of a 2-sport athlete Zion Crowe. Zion is a standout on the basketball team and was All State Honorable Mention Division V for football. The