WHERE ARE THEY NOW? VOL 1: Roundtree 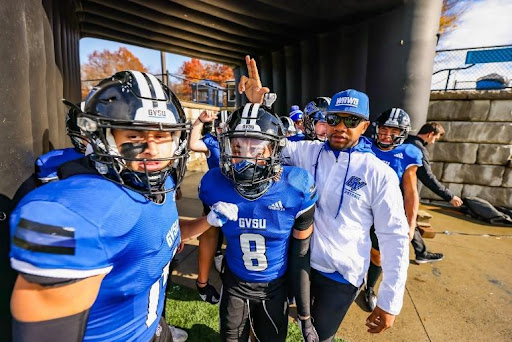 WHERE ARE THEY NOW? VOL 1 Roy Roundtree

We are doing a series of interviews on former players from the 937 area on what they are currently doing now. These former players still rep the 937 wherever they go.

Roy Roundtree was raised in Dayton Ohio. He played pee wee football for the Dayton Flames. Of course, when asked, who the best pee wee football team in Dayton is he confidently replied saying, “Dayton Flames all day. I know it’s a lot of great pee wee organizations, but the Flames breed them yearly.” Some of the former Dayton Flames players include Na’Shan Goddard, Donye’ McCleskey, Sammy Anderson, and Vayante’ Copeland. In high school, Roundtree played football under Coach Maurice Douglas at Trotwood-Madison. In Douglas’ words, “Coach Roundtree is an overcomer. He was undersized coming out of high school. He was 6’1 and around 155lbs. He was determined to prove everyone wrong, which he did on the field and in the classroom at Michigan.”

After graduation, Roundtree attended the University of Michigan on a football scholarship. “I had a great career at Michigan from 2008-2012. I was able to make strides in the record books that set me apart from others.” Roundtree’s name is all over the University of Michigan’s record books. He is 7th in career receptions (154), 7th in single season receptions (72), 7th in career receiving yards (2,304), and 2nd in single game receiving yards (246). His name is among great company in those books.

Following an outstanding career at the University of Michigan, Roundtree signed a free agent contract with the Cincinnati Bengals.  He commented saying, “the Cincinnati Bengals gave me that shot, and I was thankful for it.” Since then, he has thoroughly enjoyed being a college football coach. Spending time at Colorado State-Pueblo, Limestone College, Indiana State University, The University of Michigan, and currently the wide receiver coach at Grand Valley State University. In his 9th year as a coach, he is grateful for the influential mentors during his career to include his position coach at the University of Michigan, Jeff Hecklinski, who he attributes to being the one who started him into coaching. To further solidify his thoughts on coaching, Roundtree emphasizes, “I get the joy of being able to see young student athletes compete daily on and off the field. The experiences, relationships, love, accountability traits they pick up from coaching is a great way to being a great person. I try to recruit guys who have passion for something they are willing to work super hard for.”

Obviously, Dayton, Ohio is a part of Coach Roundtree’s recruiting area for Grand Valley State University. So I asked him, “what does it mean being from Dayton and returning home to recruit kids from where you grew up?” Roundtree said, “It’s a great feeling, but still a process.” He is trying give the players in Dayton, Ohio exposure to other colleges than the only schools they are probably familiar with.  He believes most kids are not aware of what many other colleges have to offer so he tries “…to give them honest feedback. I try to eval the Dayton area so I can make sure I give a kid who deserves the opportunity to attend my university.” To be recruited by Coach Roundtree, you need to be a well-rounded student athlete. Things Coach Roundtree looks for in potential recruits are a specific skill set, behavior in school, grades, and interaction with peers. “Character is huge for us at GVSU,” said Roundtree. He has successfully recruited 3 players out of the Dayton area to Grand Valley State University, Jason Ward II (Chaminade Julienne 2021), Kenyon Owens (Chaminade Julienne 2022), and Antwan Blackshear (Trotwood Madison 2022).

Roy Roundtree is a very respected coach. He is very personable and takes care of his players. He said “time will tell” if he sees himself coaching in the NFL one day.  Coach Roundtree ended the interview on this note: “Dayton is home. I was brought up in this area my whole life. 937 was something I always carried with me when I was in college. I wanted to put on for my city in a way that many did before me. It was all about building my own legacy when I left the nest at home.”

GOATS AND LEGENDS VOL 3. Tom Montgomery   We are doing a series of interviews with coaches in the 937 area who many consider to be a GOAT (Greatest of

If you have never heard of the name Bryce Schondelmyer you may soon will. The 6’2 195lbs c/o 2023 quarterback from Arcanum High School was named the Ohio Prep Sports